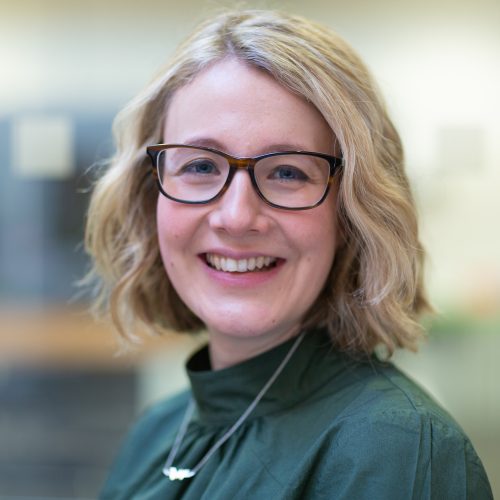 Her PhD research explores design’s role in meaningful engagement on future prospects with young people living in underserved places in the North West of England.  She is conducting this through a series of collaborative projects with organisations and businesses in the region.  One of the projects, Redesign by the Sea, can be viewed here and was showcased at the Design Research for Change Showcase at London Design Fair in 2019.

Throughout 2020, Laura worked as  Research Associate on the AHRC Design Leadership Fellowship with Professor Paul Rodgers.

Previous to her PhD research, Laura worked for over five years in ImaginationLancaster in various co-design and knowledge exchange focused research and design roles.  This included the role of Research Associate for Leapfrog, for which Laura worked with various organisations including the NHS, Lancashire City Council, Blackburn with Darwen Council, Child Action North West and led the development of tools for young people in care and the Inspirer newspaper, which won a British Youth Council award for innovation.

Laura is a Fellow of the Royal Society of Arts.

Laura’s background includes a degree in Industrial Design and a Masters in Multidisciplinary Design Innovation, both from Northumbria University in Newcastle upon Tyne.

Tool sharing with Cilip: The Chartered Institute of Library and Information Professionals

Leapfrog is working closely with Rebecca Addey, a Paediatric Patient Experience Officer at Blackpool Victoria Hospital and her colleagues as part of the Rigorous Stories project at Lancaster

Lancashire Care NHS Foundation Trust provides health and wellbeing services such as health visiting, sexual health, and dentistry across Lancashire at over more than 400 sites. They have over 9000 members who have joined because they want to have their voice heard in an organisation that matters to them, as well as be kept up-to-date and informed about services and events

Open innovation for textile-like materials made on a paper machine

The aim of New IDEAS is to develop, refine and disseminate highly innovative knowledge exchange approaches to local, academic, creative industries and stakeholders that are not dependent on delivery by staff from Imagination for success

The Leapfrog project will be a close collaboration with public sector and community partners to design and evaluate new approaches to consultation.

An interactive conference, which took place on the 26th and 27th of September 2013 that explored academic engagement with the creative sector as part of The Creative Exchange project