In 2021 we received funding from PETRAS to develop a participatory policy for IoT (and edge computing) with Lancaster City Council. Now that we have developed the policy, we are reflecting back upon the project and what we learned.

The aim of the project (we wrote about this in our previous blog) was to develop a ‘new, robust policy for ethical use of IoT data in Lancaster’ and a fully implemented IoT Transparency Guidelines tool which can be used by organisations who are considering IoT deployments and wish to consider the transparency aspects and ethical data use.

One of the exciting aspects of the project was the use of design fiction and walking to gather insights from the city (we wrote about these here). On a sunny day during summer 2021, we walked through the city with officers from the city council and explored the different ways in which sensors that either existed, or were made up, might impact the people and other inhabitants of the public spaces in the city centre. One of the strengths of using design fiction, and particularly in developing policies, is that it can start conversations about an issue, and lets people think creatively beyond the constraints of reality. The walk provided us with some great insights that we recorded and eventually fed into the policy. Getting people together to view and experience the real and fictional IoT sensors was very effective, particularly for those who did not have any prior knowledge of what the devices actually did. Looking on maps can be useful, but engaging with a place can help people to visualise and understand the potential benefits and risks of IoT systems and the data they gather. 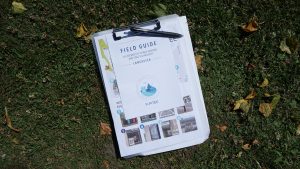 After the walk in the city, we held a virtual walkshop online (we wrote about that here) for IoT experts. Using videos of the same sensors we used in the physical walkshop, we led the experts around a virtual Lancaster, using the Gather Town platform. We used this as we couldn’t invite people physically due to COVID-19 restrictions. However, the virtual workshop worked even more effectively than we originally planned, and we are going to look at how we might develop this method and roll it out to other organisations who might want to explore IoT devices in their own towns or cities.

Our final workshop took place in December with officers from the city council. The aim of the session was to take the policy areas we developed through holding the two IoT city walks and to refine the statements with the officers. One of our main aims for the project was to work with officers in developing the policy, which could then be taken and adapted, then hopefully adopted within the council.

At the session we presented the policy areas (image) and asked the participants whether they thought they were important, and to change any wording. We then took the policy and explored who it would impact and who should be involved in developing it further and making sure the policy is actually put into practice.

After the session we pulled together all of our findings from the walks, literature and workshop to produce a draft policy for IoT sensors in public spaces. The policy draft is currently being refined and the city council intend to embed it into a wider policy they are currently developing. Having the prototype policy adopted by the council is a fantastic outcome for our project and we are excited to continue working with them in developing it further.

As part of the project we also developed Trustlens, a tool that can help organisations ask questions and explore ethical implications of using IoT in public places. We will be launching the website and the tool in the coming weeks, so stay tuned for more information.

Considering the ethical implications of digital collaboration in the Food Sector