Is Apple's iWatch the answer to a healthier and fitter lifestyle?

It has been exactly a month since the unveiling of the iWatch and iPhone 6 by Apple on the 9th of September. Along with it came a lot of promise and expectations although it would be at least another three months before it becomes commercially available.

One of its key features advertised is the health and fitness apps. These (Fitness and Workout apps) track different levels of physical activity via connecting to an iPhone and its existing Health app. The Fitness app tracks and records general fitness related activity, such as calories burned, number of steps taken, etc. The Workout app, on the other hand, tracks physical activity for customised workout training whilst responding to your heart rate and movement, like having a personal trainer with you.

There has been a lot of hype in the media about wearable tech helping you to live longer, with the iWatch being characterised as a comprehensive health and fitness device and articles going ahead with claims that Apple iWatch will revolutionize personal fitness and health care industry.

So is the Apple iWatch a panacea for health and fitness? Casn it help us stay healthier and fitter?

I will attempt to respond to the question by answering to the three key questions raised in my article on wearable technology design in the Guardian.

Firstly how does the iWatch make sense of the plethora of information received from the wearer and how relevant and useful are they for the user and health professionals?

Although it was initially rumoured that the iWatch will pack a great range (10+) of health related sensors. This was a really exciting development as it would have presumably enabled the generation of relevant health data beyond the simplistic tracking of calories burned and number of steps taken distinguishing the iWatch from its predecessor wearable tech products.

However, during its launch, a month ago, Apple revealed that it will feature an LED heart-rate sensor which “along with an accelerometer and the GPS and Wi‑Fi in your iPhone, to measure all kinds of physical movement”.

How will the iWatch make sense and present the data gathered from the aforementioned sensors is still shrouded in mystery. A question of equal importance is up to what extend the data collected would be of value to health professionals for it to be a truly step changing health device? We would have to wait until the iWatch is released in order to see how true Apple’s statement about “being able to measure all kinds of physical movement” is.

Moving on to the second key question. How wearable is the iWatch?

For health or fitness related applications to work properly, wearable gadgets need to be worn all the time. One would expect that the fashion statement of the iWatch and its slick design would alleviate the issue of consumers ‘getting weary of wearing a wearable’. Unfortunately it seems that is not the case. As reported in several articles, following the iWatch launch in early September,  he battery life of the device poses a great barrier for a ‘round-the-clock health tracker’; as indications show that a full charge of its battery lasts for up to a day, meaning that one has to remove the iWatch to charge during sleep or  other parts of the day, which severely diminishes the health monitoring aspects of the device.

Thirdly, although one can see the iWatch as being used by young and fitness aware consumers it is not clear how Apple has addressed with the iWatch the bigger market and challenge of non-physically active people?

How would it motivate the average Joe and Jane to take up physical exercise in the first place and follow a healthier lifestyle? This is assuming they have $349 (starting price in the US) for the iWatch and another £459 for an iPhone 5 or £539 for an iPhone 6 to pair it up with.

Therefore despite the fanfare surrounding the iWatch’s health and fitness capabilities, one cannot see the device and its apps as a paradigm shift in revolutionising healthcare and turning us into fitness bunnies. It is still, though, interesting to see that big companies the likes of Apple and Samsung invest part of their research and development into this exciting area of health wearable technologies and we hope that in the near future one of them will get it right. 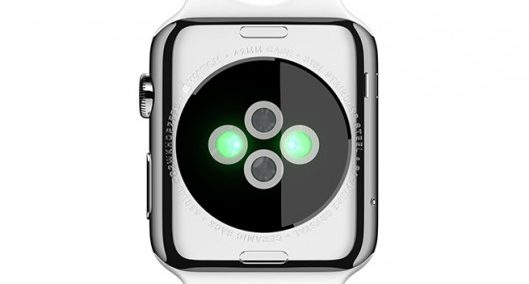 Sensors For Health And Wellbeing