The PROUD Sensitising Event 'City Park' Workshop at The Storey

An event at the Storey Creative Industries Centre to turn project consultation in the start of a co-design process. Here people started to design the intervention process for the next 6 months

The Lancaster City Park initiative was discussed last month at a consultation event, and last week representatives from the community and cultural sectors came together to develop ideas. As a first day in my new part-time role, a secondment from Litfest to work as Interim Design Manager for The Story part of PROUD, it was a fantastic introduction to the European co-design project.
Dr. Leon Cruickshank led the workshop, after brief introductions from Lancashire County Council’s Roy Halliday and Lancaster University’s PROUD Design Manager Gemma Coupe, who set the scene for the challenge at hand and the role that the PROUD co-design project can take in helping the City Park initiative.
With notes from the previous meeting the PROUD team had created a huge word cloud. The cloud had been hurriedly drafted into rough thematic areas with overlaps and repetitions, typos and personal vocabularies included. This large concrete poem was printed onto huge sheets of tracing paper and 3 copies were hung around the space. Armed with Sharpies and a sense of humour, we were invited to make connections, to make elements stand out, to articulate what was important to us. I don’t know if the typos were there on purpose, but I hope they were, as we had fun rounding up these simple errors while we considered the more complex task at hand. I think it’s useful to be able to contribute something, even a spelling correction, while waiting for a more substantial contribution to occur to you somewhere deep in the old grey matter.
After some frenetic conversations Leon then carefully overlaid the resulting scribbled and scrawled tracing paper word clouds. The process of discussion and visual layering helped us as a group begin to martial the complexity and diversity of information and opinion that the City Park project provokes. It was a necessary preparation for the next part of the workshop where thematic considerations and personal or organisational interests were pushed aside as we considered the actions and interventions that might help us to engage others in  shaping a City Park in the heart of Lancaster. The more structured nature of the task meant we came out of the workshop with some clear ideas for next steps and happy to have contributed to an energising workshop.
Guest post by Andy Darby (Proud/Litfest) 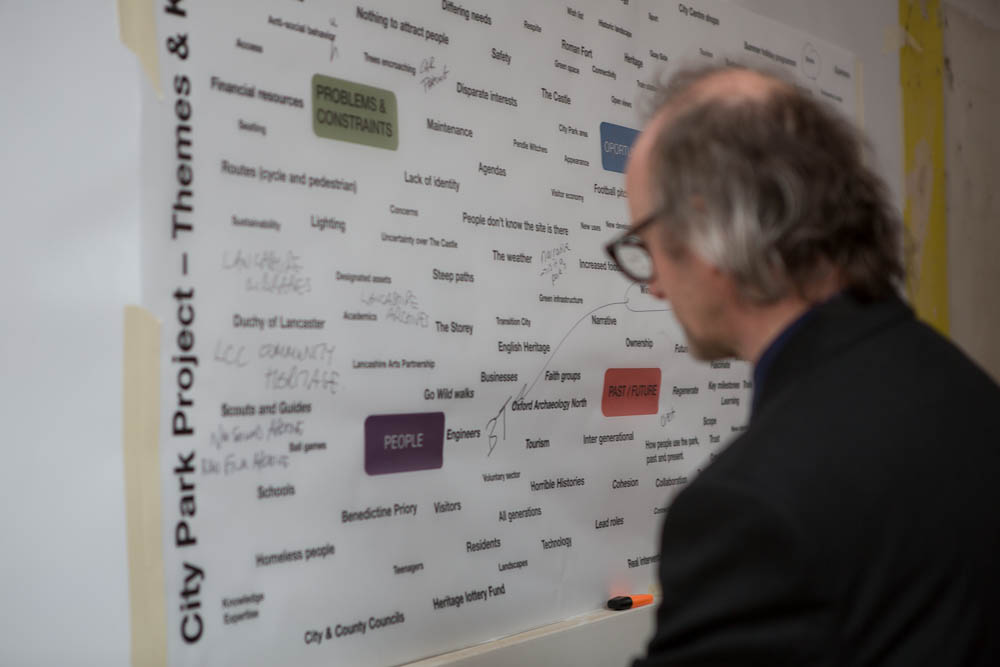 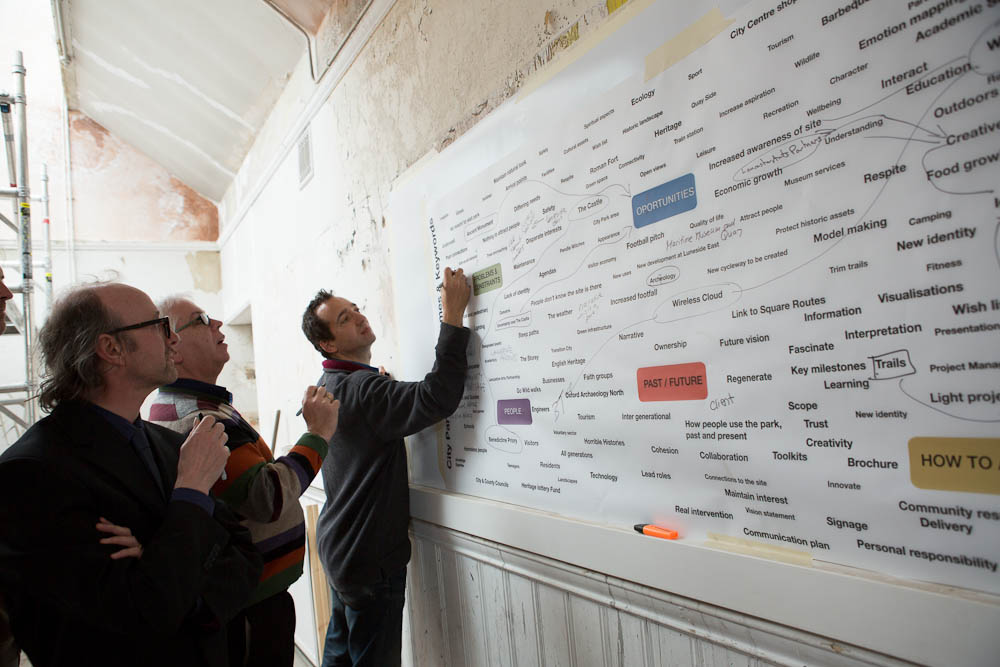 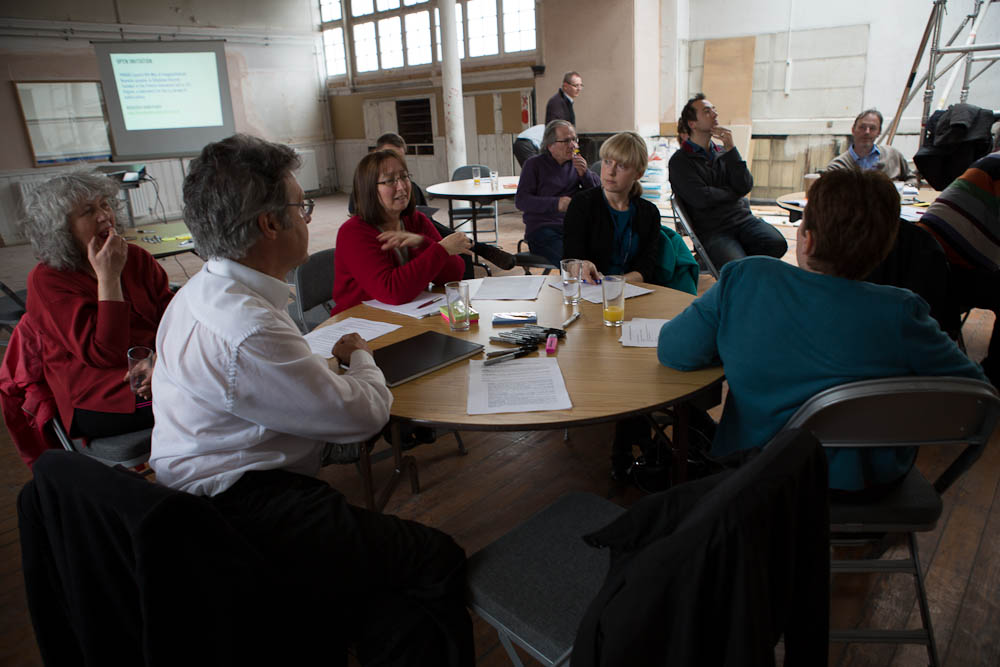 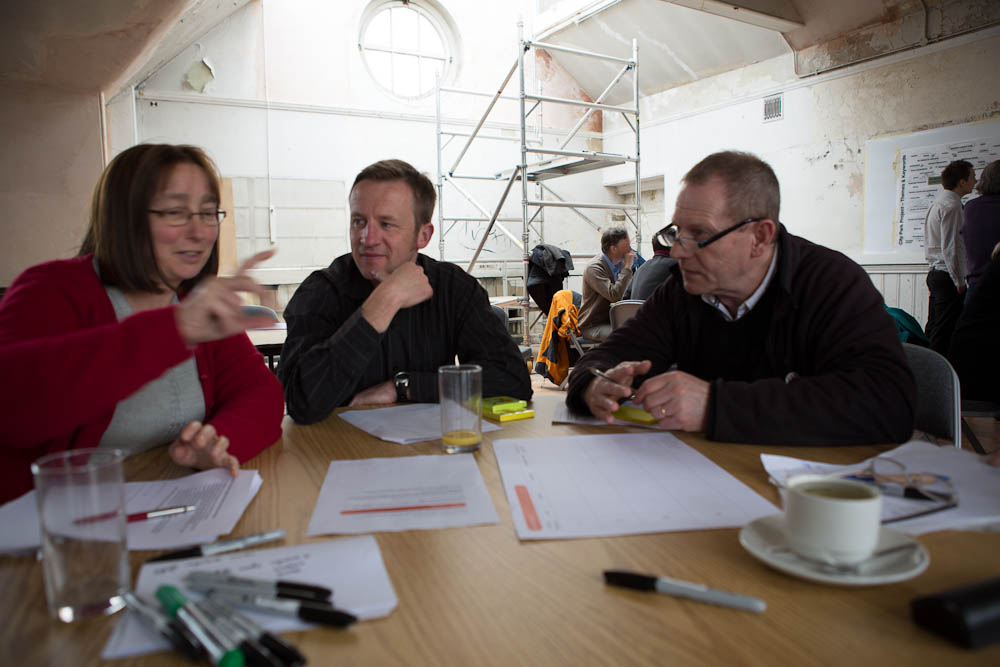 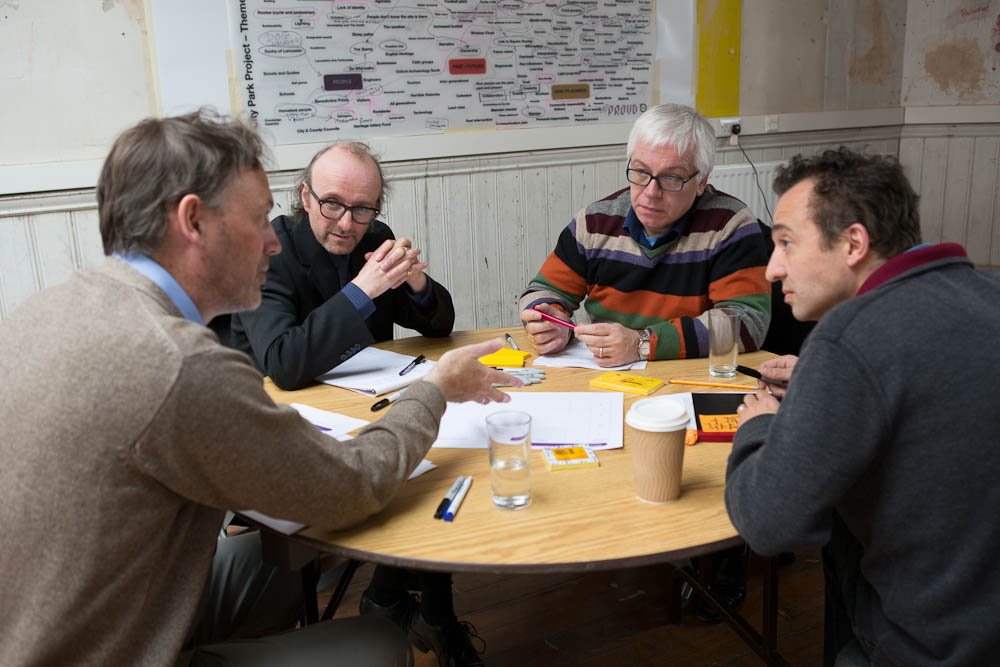 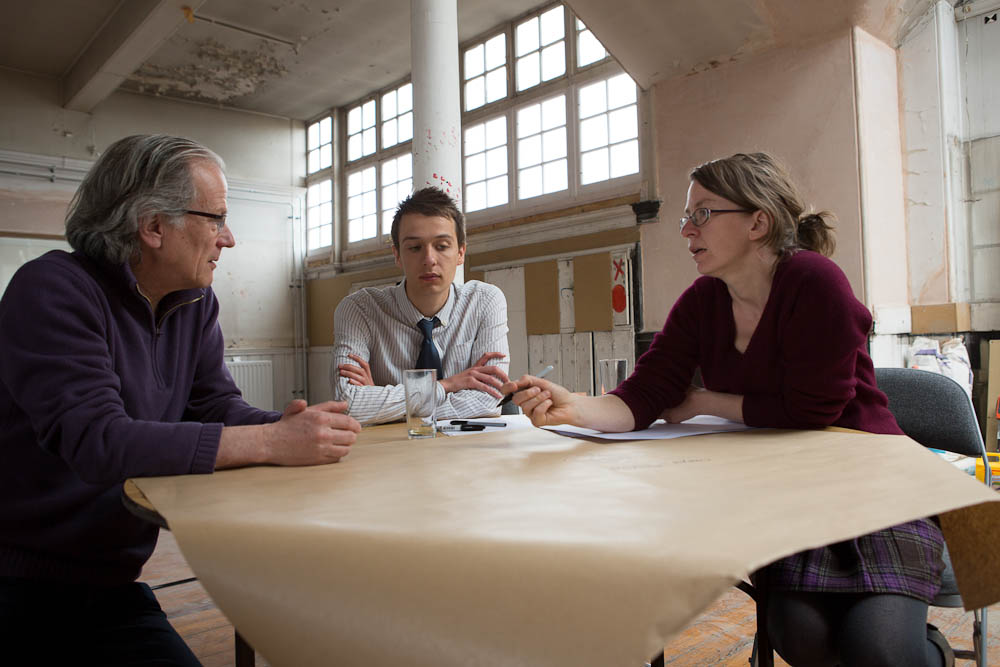 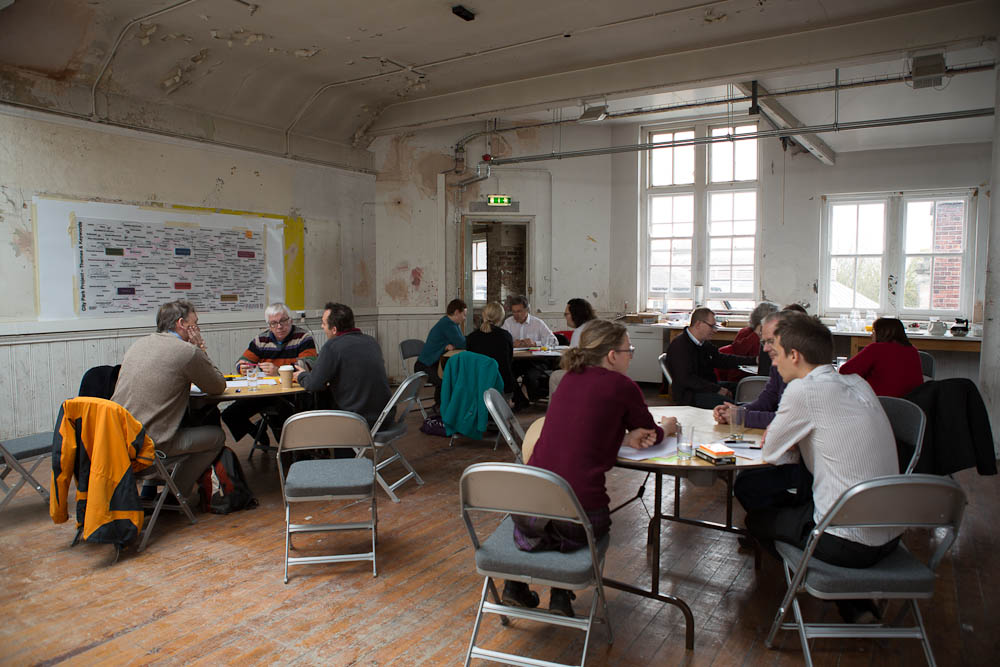 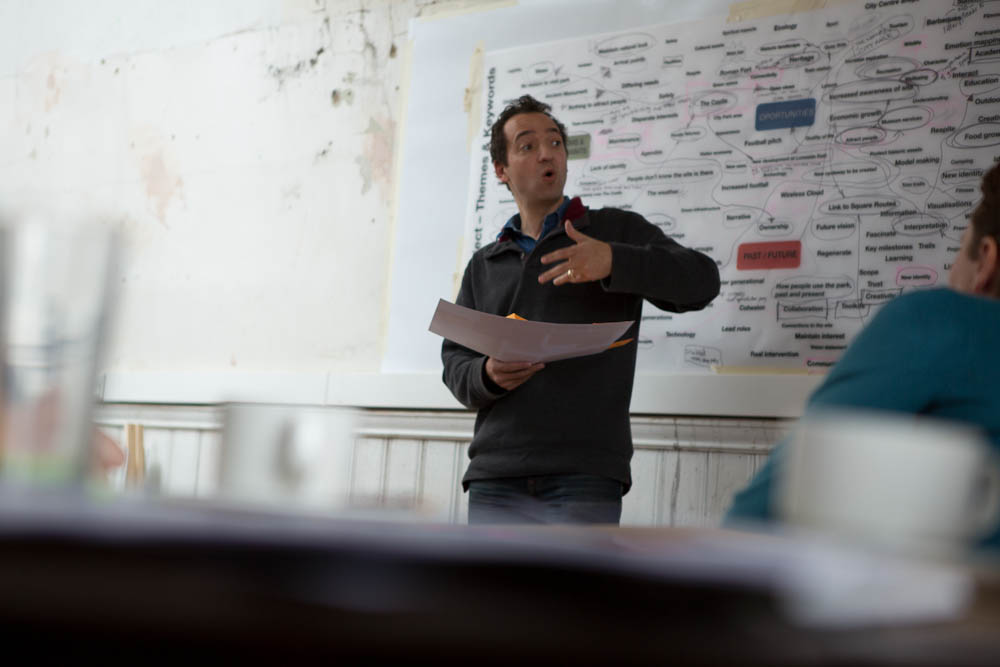 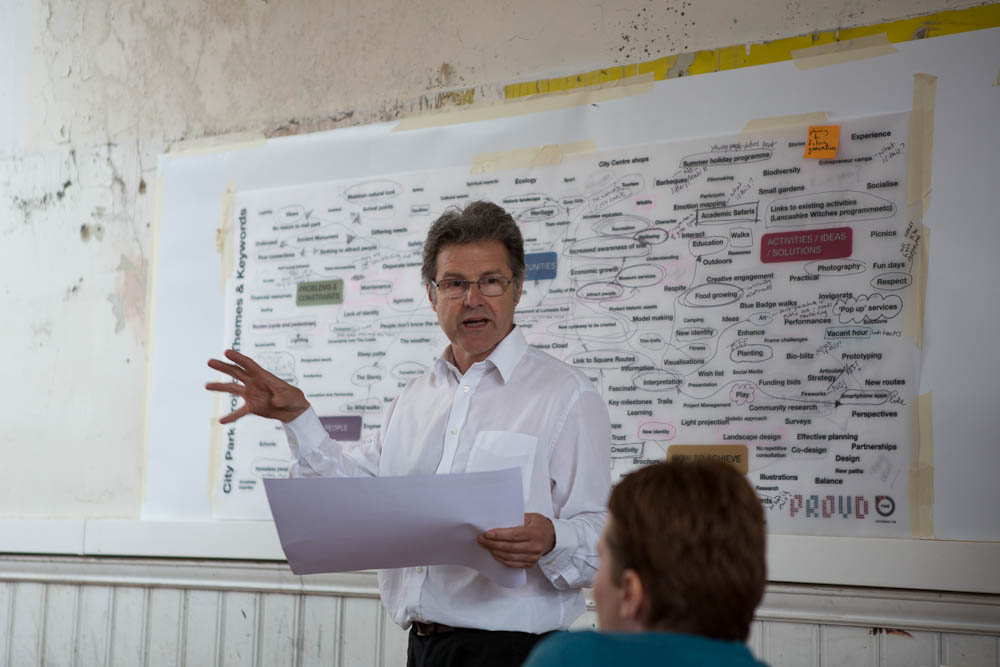